In the village of Puzonii, it is suggested to take a look around the homestead yard of Rimantė Butkuvė, a folk artist and carver of angels.

The village of Matiesioni is famous for being the birthplace of the linguist Professor Jonas Kazlauskas.

The gravel road leads through the forests of Naudžiūnai and Siponi, where there are plenty of mushrooms and berries, and picturesque landscapes open up to the Prienai sila and the Nemunas. In Sipony, you can visit the remains of the Sipony Manor. The manor, the story of whose revival is being written today, was located on the Nemunas River more than four centuries ago. The exact date of establishment of Siponii manor is not recorded in historical sources. However, based on LVA data, we can say that the first owners of the Siponii manor, the Sipavičiai, from whose surname the manor derives its name, settled in Siponis in the 16th century. at the end The history of the Siponii manor is associated with the surnames of many rich and respectable landowners who lived in this region: Juchneviči, Stognevai, Praneviči, Jurkeviči, Mikolajeviči, Counts Butler, Agnieška Jckovna. By the way, Agnieszka Jackovna's patronymic is associated with the origin of the place name Jackonii, as well as Agnieszka's origin from the Siponi region. A significant historical fact testifies that in 1812 at the end of June, the chief of staff of Napoleon's army, Marshal Louis Alexandre Berthier, stood in the mansion. From the 17th century In the beginning, an active, but very changeable life took place in the estate. The frequent change of its owners did not always positively affect the existence of the estate. Therefore, based on the surviving documents, which contain many different contradictions, it is not very clear whether the last owner of the manor, S. Rutkauskas, was the legal owner of the manor or just a tenant. However, the Soviet authorities exiled him and his sister, who died there, to Siberia, and after returning home, he was laid to rest in the Nemajunai cemetery. in 1847 The Siponii manor was statistically described. Detailed data on the manor farm, peasants, and their businesses are provided. It is stated that the manor was located on both sides of the Nemunas. Two streams flowed through its territory - Krakila and Vizdija. The description mentions that the road to Nemaniūnis runs through the manor. The same road is mentioned even in 1929. 255 peasants belonged to the estate. There were two taverns, a wine and smal factory on the territory of the manor. 40 hornbills and 400 sheep were raised on the estate. 1925, 1927 They wanted to change the name of the Siponii manor and call the area Kirkilai village or Jundiliškiau. However, the new name was not confirmed in any case. The Siponii Regional School traces its history back to 1918. also started counting in the estate, where he remained until 1939.

The decoration of the village of Nemajūnai St. Peter and Paul Church. It is the only wooden neo-gothic church in Lithuania, where a unique carpet tied with ribbons of young marts is preserved. A chapel dedicated to the writer Stanislaus Moravski stands in the nearby cemetery. Elijošius Nonevičius-Nonys, the pioneer of veterinary science in Lithuania, is also buried in the cemetery. 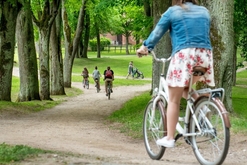 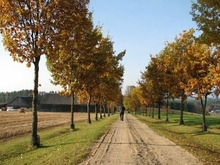 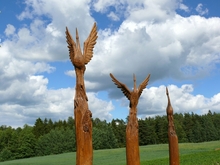 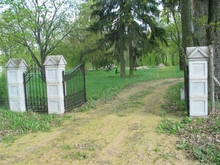 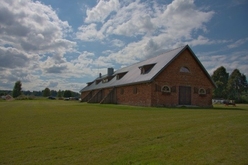 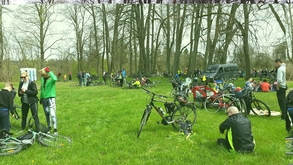 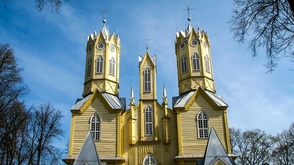 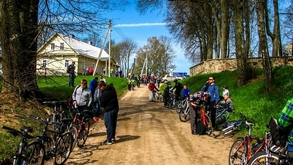 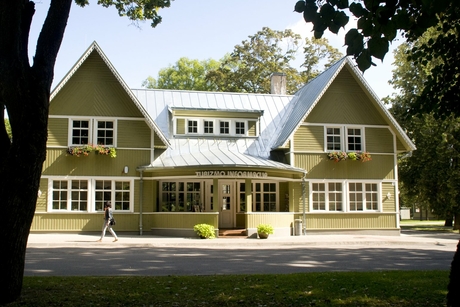 Birštonas Tourism Information Center
architecture
Not many people know that Birštonas mineral water resort was a private town until the restoration of independence. What’s even more interesting is that written records of the resort date back to the 14th century when a fortified wooden castle was mentioned in the New Prussian Chronicle by Vygandas Marburgietis (Wigand of Marburg). In 1382, the Grand Master of the Order of the Teutonic Knights was informed that a homestead was founded by the salty water (near the Nemunas river). It happened almost 500 years before the location was granted official status as a resort! The small town began to be known as an oasis of rest...
10 min.
< 10 min.
1.9 km 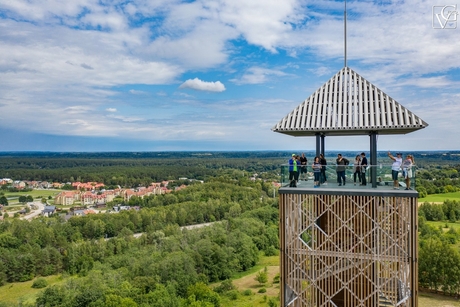 Birštonas Observation Tower
nature
The Nemunas is not only the largest and water-rich river in Lithuania, but also the most glorified in the songs, woven into legends and described by chroniclers in ancient times. Even now there are modern legends about the loops of this river, and so far geologists cannot answer the question of how the loops had formed. Scientists say that the loops of the Nemunas are a unique phenomenon not only in Lithuania but in all glacier areas as well. In search of the shortest path to the Baltic Sea, the Nemunas performed the work of a real sculptor. “Grandpa” Nemunas mesmerized a lot of travellers with his valleys,...
20 min.
30 min.
13 km Homestead of folk artist Rimantė Butkuvė
sculptures
Folk artist Rimantė Butkuvė was born in Kėdainiai district, near the Apylaukis manor, grew up and studied in Kaunas. While studying at school, she was interested in poetry, theater, painting, and loved books. Rimantė started her career as a carver by accident. The union of folk artists asked to restore the cross. Rimantė bought a wood carving with an interesting composition from a folk craftsman: the Virgin Mary and an angel stumbling in prayer at a cross surrounded by a fence. That angel caught Rimante's attention and she decided to carve it herself. Since then, wooden angels have "settled" in the heart and hands of...
15 min.
10 min.
5 km 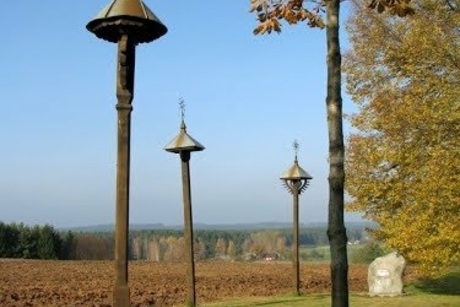 Homeland of linguist Jonas Kazlauskas
sculptures
Jonas Kazlauskas was born for the science of language, he could explain for days and weeks, watching with my eyes, some insignificant fact of the dialect or old writings, turn it over in any way, leave, forget and return to it again with new hypotheses and new passion. Justin Marcinkevičius Jonas Kazlauskas (1930-1970), a linguist and professor, was born and grew up near Birštonas, in Matieshiones, one of the most prominent people of the Nemunas region. Studied at Dzingeliškii primary school and Nemajūnai seven-year school, graduated from Prienė gymnasium with a gold medal. 1949-1954 J. Kazlauskas studied...
20 min.
< 10 min.
3.5 km 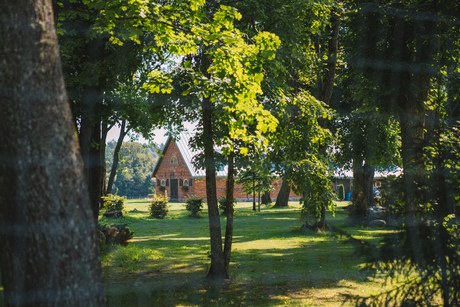 Siponii Manor
manor
In Siponys you can visit the remains of Siponiai manor. The manor, whose revival history is being written today, was located on the Nemunas River more than four centuries ago. The exact date of the establishment of the Siponiai manor is not recorded in historical sources. However, based on the data of the LVA, we can state that the first owners of the Siponiai manor, Sipavičiai, from whom the surname and the name of the manor are derived, settled in Siponys in the 16th century. at the end. The history of Siponiai manor is associated with the names of many rich and honorable landowners who lived in this region: Juchnevičiai, Stognevi,...
10 min.
15 min.
7 km 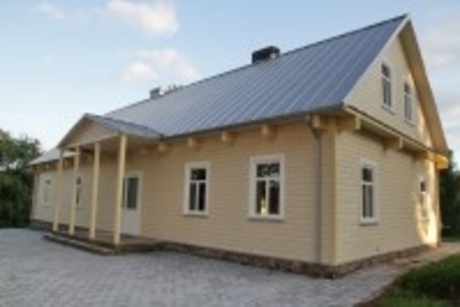 Holiday hotel "Birštono Tulpe"
holiday hotel
"Birštono tulpe" is a holiday home of Kaišiadorys Diocese situated next to a wooden negotiated church of St. Church of the Apostles Peter and Paul in Nemajūnai village. This place of stay is most suitable for traveling pilgrims.
< 10 min.
15 min.
8 km 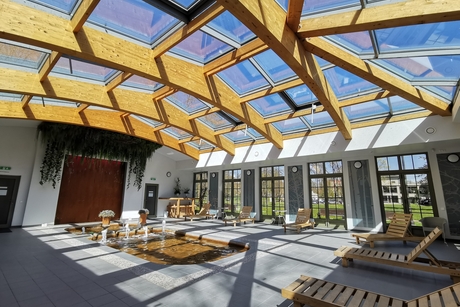 Mineral water pavilion „Birutės Villa“
mineral water
In Vytautas Park, right next to the Nemunas embankment, you will see a white one-storey building with large windows. Come in at any time of the year. Sun loungers with fountains around the saltwater pool await holidaymakers. When you lie down, you can breathe calmly and deeply in the salty air watching the sky through the glass roof or the changing colors of the "waterfall". It is free of charge. Doctors claim that the natural mineral water evaporating in Birutė's villa is especially useful for patients with respiratory diseases or who want to prevent them, it has a positive effect on the skin, which contains...
10 min.

There are no reviews. Be the first one to give a review!